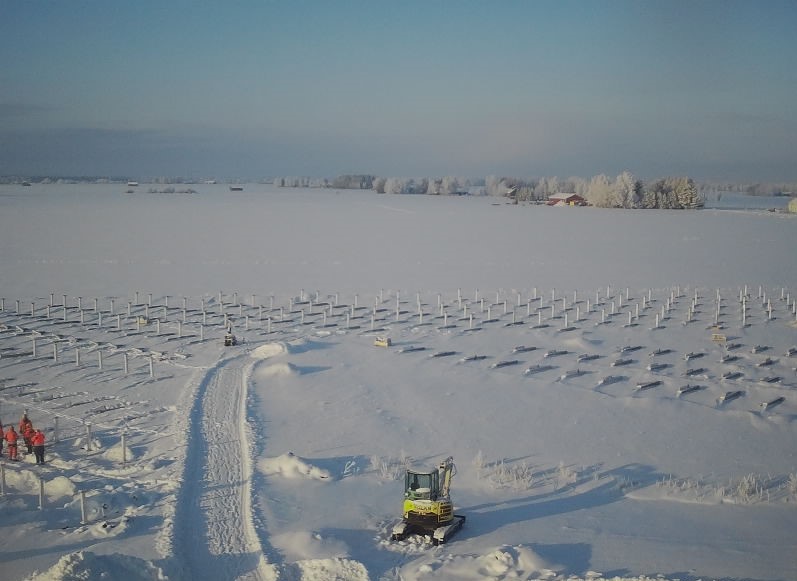 With the solar power system the company achieves savings in energy costs and develops itself towards a more energy efficient water company.

The solar panel system is produced in Finland

The solar panel system is produced in a Finnish factory in Salo.

Business Finland has admitted a 20% energy aid for the project. The key aim of energy aid is to promote the development of innovative solutions for (partly) replacing the current energy systems with a low-carbon alternative in the long term. The distributor of the solar panel system is Salo Solar, a company which designs and produces solar panels in Salo, with 40 years of experience in the solar panel industry. The system requires 1350 solar panels which will be assembled on ground beside the plant. The power of the system is around 500 kWp. The construction started on fall 2020 and it is estimated to be ready on spring 2021.

Sustainability and energy efficiency are the key elements in the strategy and values of the company. Turku Region Water has also commited to promote the carbon neutral Turku by 2029 -target. The electrical turbine at the end of the pipeline leading to Saramäki in Turku regulates the flow of water and produces clean energy. Since the managed aquifer recharge plant started it’s activity, the company has been producing energy from the flow of the water. The turbine that slows down the flow of clean drinking water produces the majority of the electricity needed for the pumping process from the reservoirs to consumers in Turku, Naantali and Raisio.

– We have also been investigating the possibily to recover the heat of the drinking water as part of the water production and distribution system and we have signed an intention letter with Turku Energia on a pilot project, which evaluates the possibilities of the heat recovery -project, summarizes Turku Region Water’s CEO Aki Artimo.

We use cookies for the necessary functions of the website and for statistical and targeted social media communication purposes. Some cookies relate to third-party services. Some of the third parties are global operators, so we cannot guarantee that the information stays within the EU and protected by the EU’s General Data Protection Regulation.

You can select the cookie categories you accept and update your consent. By clicking “Allow all cookies” you indicate that you approve the use of all cookies.

We use cookies on our website to improve user experience, to collect analytic information, for targeting social media communications and to develop our website. We use cookies to collect visitor statistics from the website and for analysing information. We, for example, observe which pages are visited and how long visitors stay on the different pages. Our goal is to improve the quality and content of our website. The user has the option to completely disable the use of cookies by changing the cookie settings. Disabling the cookies may affect the functions of the service and the targeting of the content of our website on other media platforms.
Necessary cookies Always Enabled
The automatically activated functional cookies are always used, and we need them in order to offer a functioning web service. Necessary cookies are needed, for example, for providing a safe connection. You can set your browser to block these cookies, but please note that not all of the web service sections will function as expected in this case. These cookies do not record any personal identifying information.
Analytics and improving the operation of the website
Cookies measuring performance enable the monitoring of visitor numbers, help us recognise returning users and help understand, how the users of the website use our web service. We use this information for improving our content, the usability of the service and the digital experience. As the analytic service we use, Google Analytics, is a global operator, we cannot guarantee that the information stays within the EU and protected by the EU’s General Data Protection Regulation. We analyse IP addresses in Google Analytics and this data is then transferred to Google servers located, for example, in the US. This enables Google or the processors it uses to transfer this data to third parties if the law so requires. Google does not connect a single user or IP address to the information it controls.
Non-necessary
Cookies that are not necessary for the operation of the website and that are used for the collection of personal user information through analytics, adverts and other embedded content are called non-necessary cookies.
Performance
Performance cookies are used to understand and analyze the key performance indexes of the website which helps in delivering a better user experience for the visitors.
Functional
Functional cookies help to perform certain functionalities like sharing the content of the website on social media platforms, collect feedbacks, and other third-party features.
Others
Other uncategorized cookies are those that are being analyzed and have not been classified into a category as yet.
Save & Accept